Altyn Emel National Park is one of my favourite places in Almaty region! I love it for endless steppes, mysterious dark old mountains and feeling that it never changes – someone three hundred years ago could stay at the same place and see completely the same fantastic landscape! So let me show you what you will see at the one of the largest national parks in Kazakhstan covering an area of some about 4600 square kilometers. Hopefully we will have chance to show you this park in our 2-day tour. 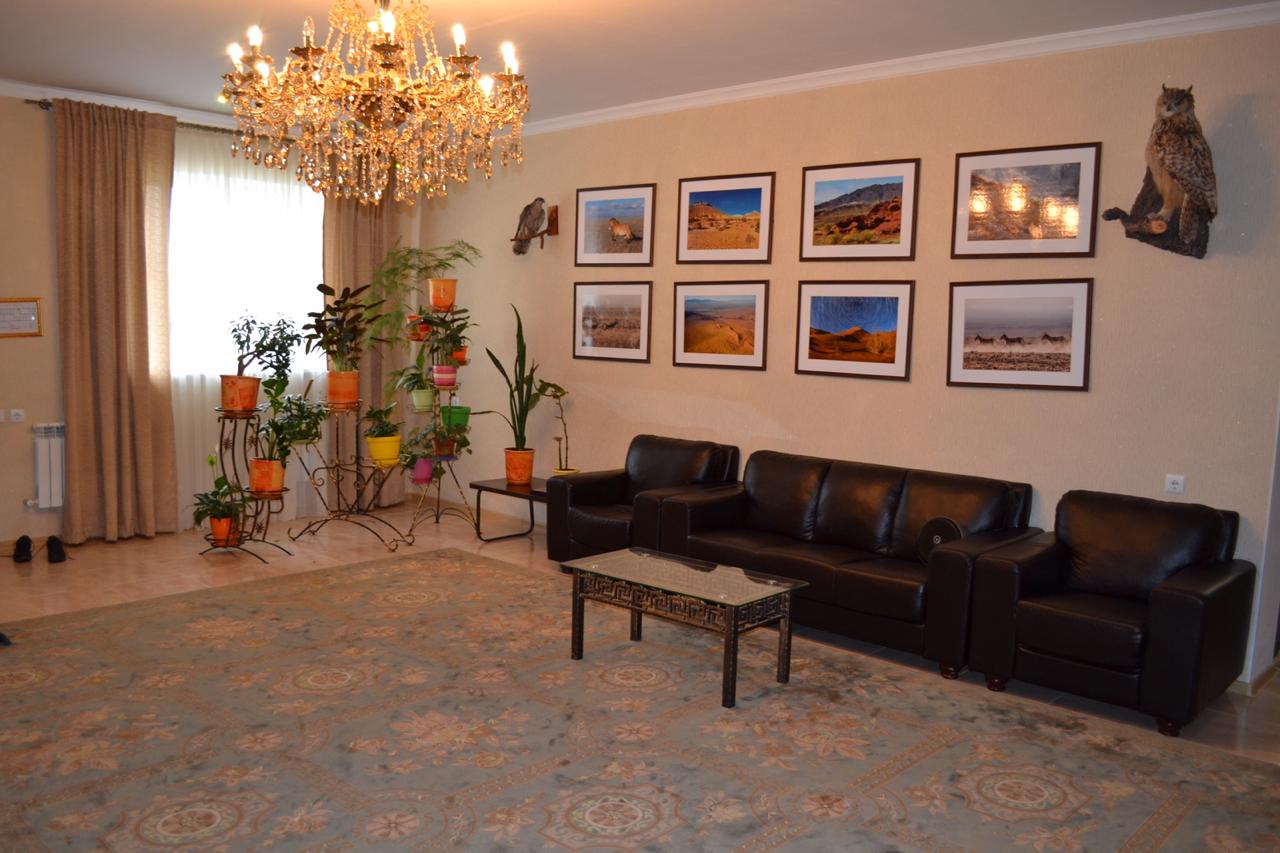 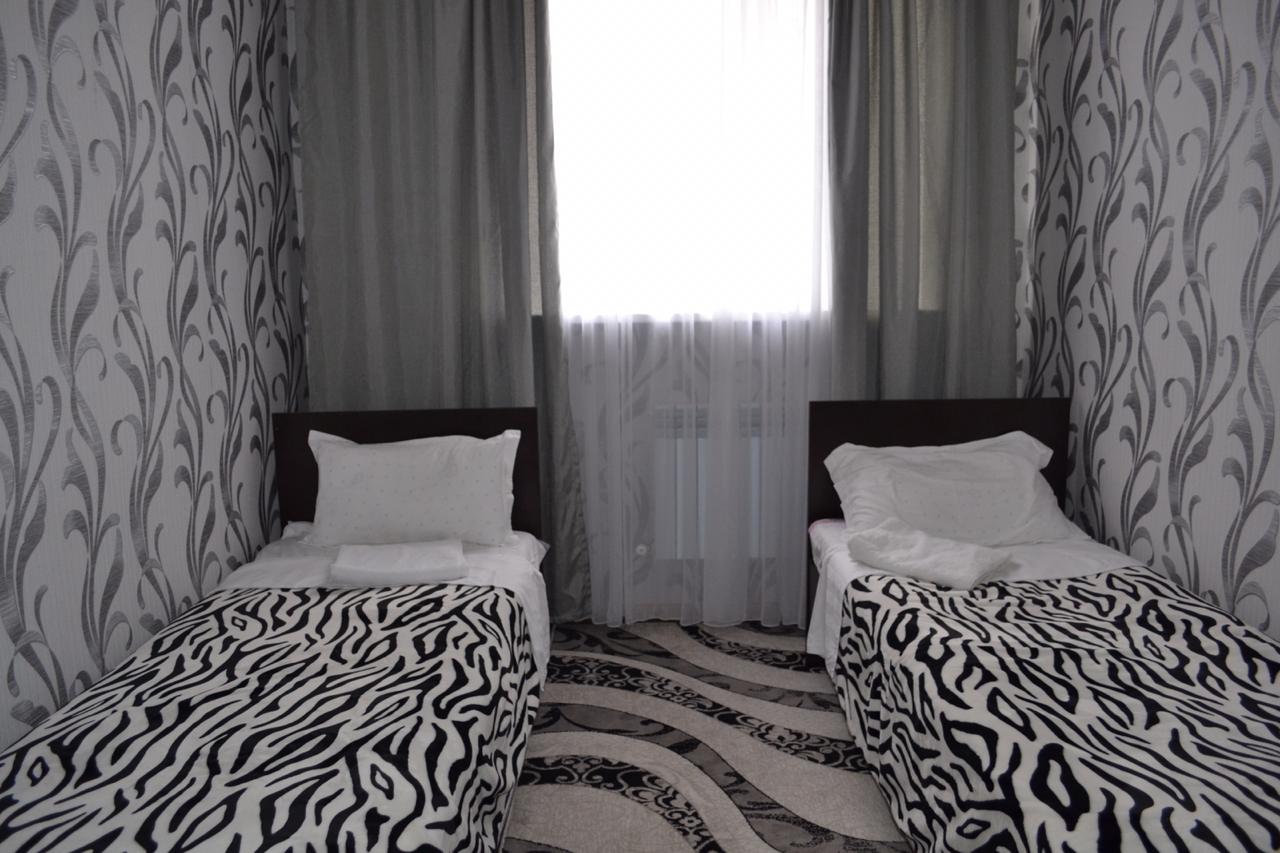 Its southern boundary is formed by the Ile River and by Lake Kapchagai. The northern boundary of the park is marked by a line of hills, a western spur of the Dzhungar Alatau range, whose name changes from west to east: Degeres, then Altyn Emel, then Koyandytau. It is said that the name 'Altyn Emel', which means 'golden saddle', was given to the hills by Genghis Khan when he passed this way in 1219 and saw them covered with sun- yellowed grass. I guess its happened after the rain, when sun suddenly goes out of heavy black clouds and all grass scorched by merciless steppe heat starts to shine like liquid gold against background of black cloudy sky and accompanied by surrealistic rainbow (sometimes even two!). I wish all my guests would see it with their own eyes! In the east of the park are two further ranges, Katutau and Aktau. The rest of the park comprises dry plain.

The way from Almaty to the main village Basshy takes around three hours. There is a great highway till Saryozek, after Saryozek the road is ok, with some potholes. On the way we will pass Kapchagay – a city in the Almaty region that appeared due to the start of construction of the Kapchagai hydroelectric station. Its famous now for casinos and giant artificial lake built in Soviet times. Its forbidden to gamble in Almaty and all playfull dudes can satisfy gambling hunger in this little town not far from Almaty. However for most of locals Kapchagay is more familiar for cheap “sea and beach” experience just one hour away from home – reservoir was built in the 1970s, it stretches for around 100 kms from East to West, the maximum depth is 45 metres, but mostly its shallow so you need to walk a bit if you want to swim. At the site of the reservoir was the village of Ili. Due to flooding, residents were resettled in the villages of Novoilisk and Zhetygen and the newly formed collective farm Arna.

So after arrival to AENP first thing we need to do is to visit central office of the park in Basshy village in order to pay entry fees. Positive part of that event is a nice little museum where you can discover history, flora and fauna of the park. There is a lunch break from 1 to 2 pm when office is closed. You won’t be allowed to visit other parts without paper permission you receive in this office.

Most of all visitors of NP stay also in the same Basshy village. There are few options: Aigay Kum hotel, another hotel managed by NP staff and homestay at Zhanka’s home. Aigay Kum is the most popular choice because of great level of comfort – impeccably clean twin rooms with shower and toilet inside of the room. But in terms of food its always better to choose less comfortable homestay – no logical reason, but food is just always better!

Also we can do camping in these four points:

Singing sand dune is a miracle of nature, rising for 150 metres incongruously above the steppes between Kalkan mountains. The Small and Big Kalkans are the Paleozoic range of the exposed type characterized by the intense destruction of the rocks. The mountains are not high and not very remarkable. They are located in the southern part of the National park and there is nothing special about them. But between those mountains there is the worldwide famous Singing Barkhan, also called the Singing Sand Dune, the pearl of Altyn-Emel. The structure famed for the sound it produces low-pitched, organ-like rumble in dry weather. Physicists explain this mystery by friction of dry grains of sand and crystalline electrization. Geologists have been losing in conjectures for many years on unnatural origin of the sand dune for such an atypically rocky steppe area. Unlike other sand dunes, this one never changes its shape because here, in the hollow between the hills, the wind rose has a special direction. The ridge of the unique sand dune is sharp as a blade.

For those who never ever climbed the sand dune it will be really unforgettable experience of going up on the narrow ridge of the dune. I should say its not easy especially on a hot summer day but the view you get from the top justifies the long way up. In the south – thin strip of the Ili River is visible as well as purple mountains of Sogety and Boguty, looking out from the white peaks of the Ketmen ridge. On the west the horizon is obstructed by the steep slope of the Big Kalkan, and the Small Kalkan – from the east. In the north – violet-blue ridge of Djungarian Alatau mountains, Chulak mountain, Matai and Altyn-Emel are visible.

Just don’t forget the hat, spf cream and closed shoes (not flip-flops! The sand can be extremely hot so its necessary too protect your feet). From the top of the Dune you can observe the grand panorama of the surroundings.

Legend among the local people says, the great Genghis Khan and his faithful warriors are buried under these sands. So the Dune signs when the soul of the Khan, exhausted by the spiritual unrest, tells his descendants about his victories. 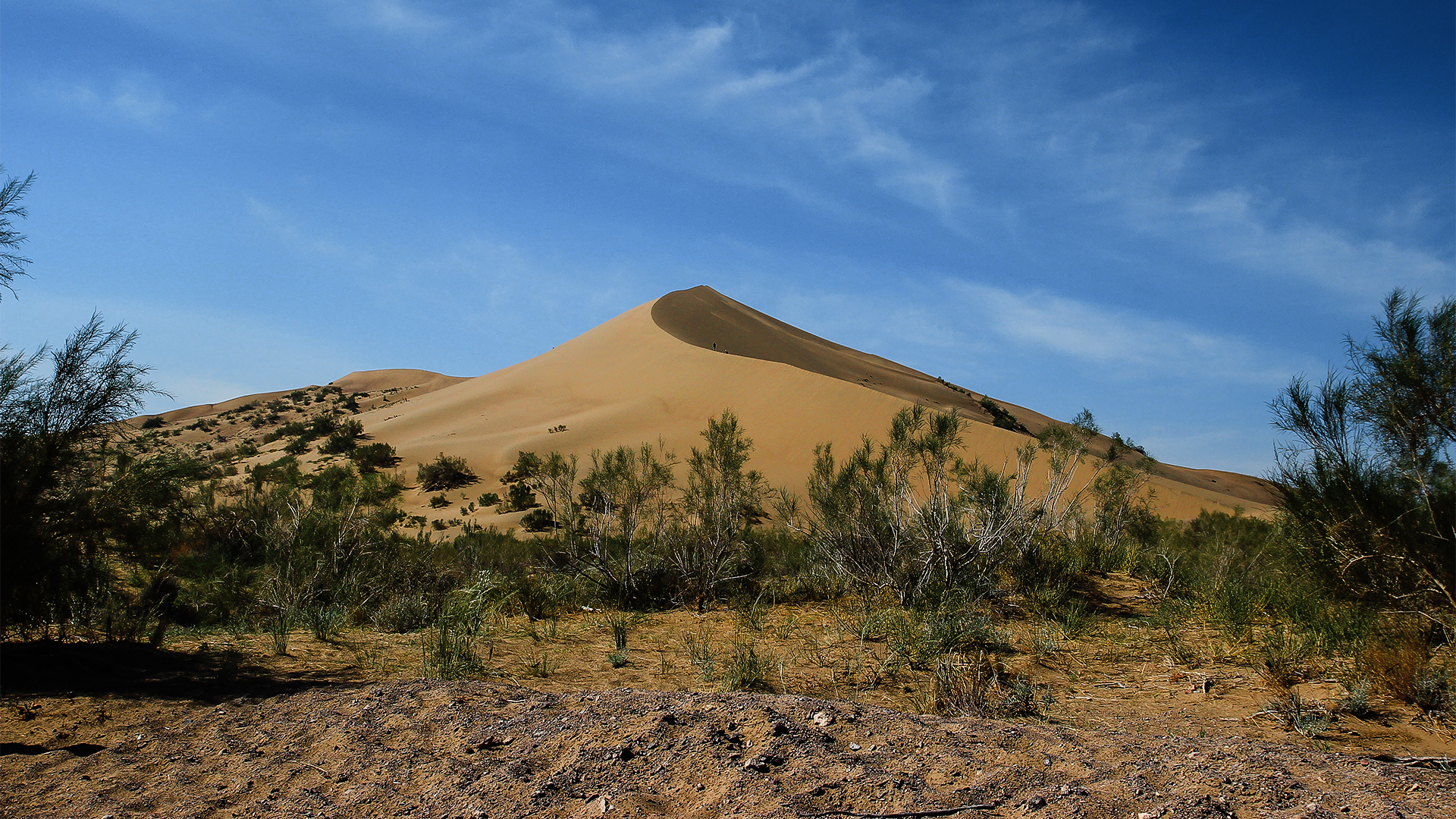 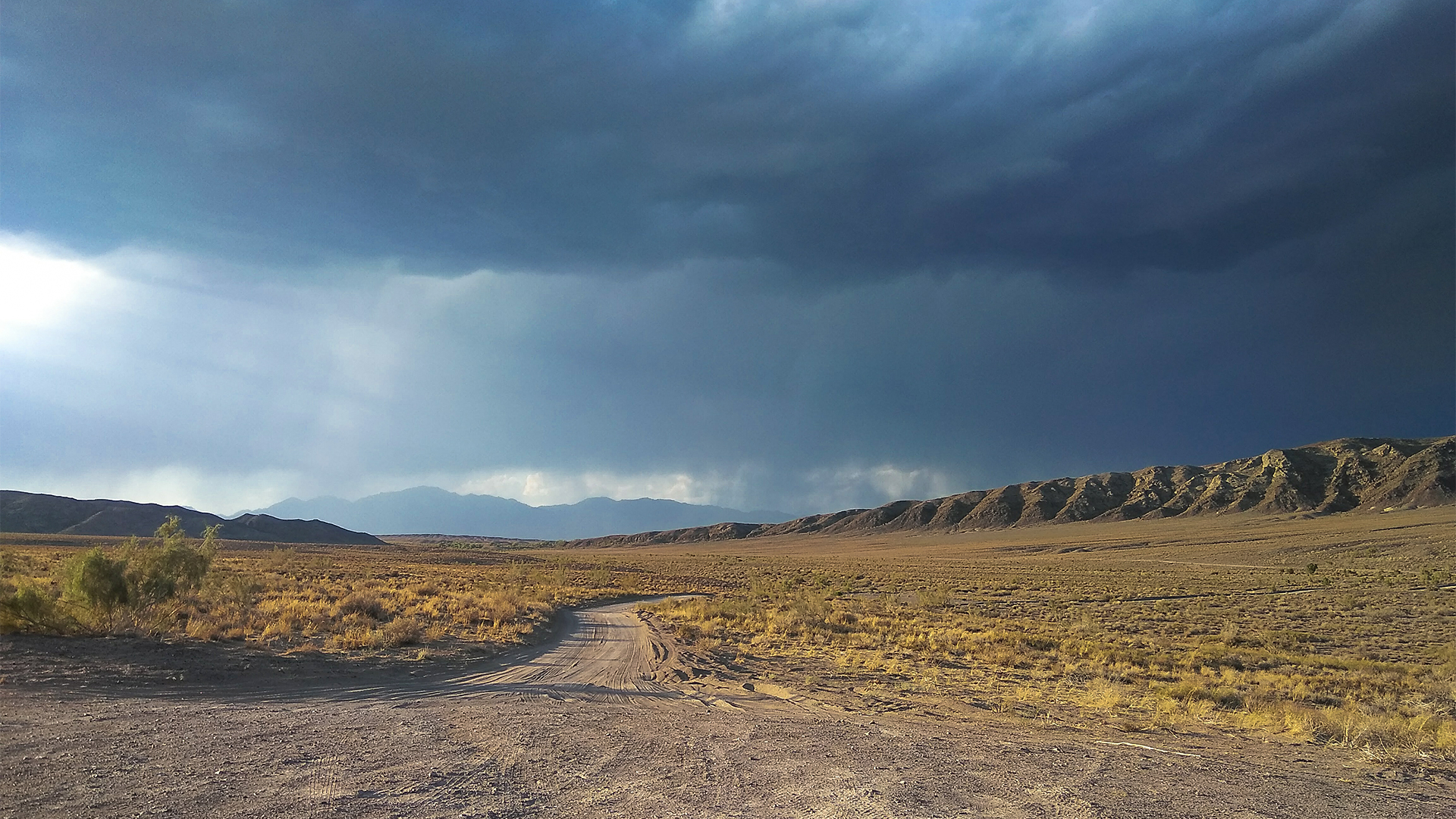 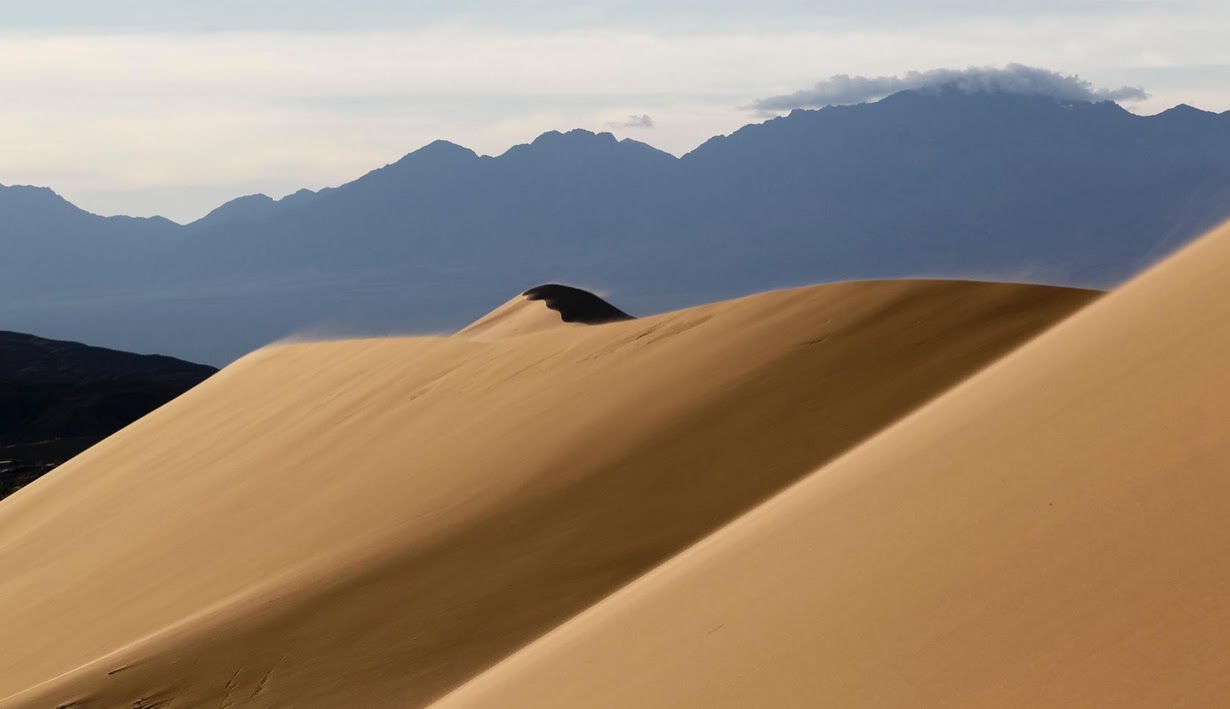 I would say that these mountains are the main reason why you have to come to AENP. Despite of awfull road the panorama of majestic Aktau will make you forget about all the difficulties. You will never forget that view!

Firstly we usually visit very ancient ruined Katutau (Harsh Mountains). In Permian (approximately 240 millions of years ago) there were two big acting volcanos. The mountains are formed by lava and some associated volcanic rocks. In the mountain area there are some inputs of the radiating dikes (a dike is an earth split filled with magma. The split is formed by the earth movements like earthquakes or volcano eruptions). Some dikes are 8 kilometers long. In the northern part of the Katutau and Aktau there are some sedimentary bed rocks of the ancient ocean Tethys. Impacted by the above mentioned natural factors the rocks formed some spectacular shapes and landscapes.

Today its unique shapes are well preserved and remain the same. These shapes include holes of all forms and sizes, grooves, cracks, gyrus, which sometimes resemble shelves, sometimes cups or royal throne, just let your imagination guide you. These lifeless, ragged, white, pink, green and red slopes look like an alien landscape. Event animals rarely come here. The environment looks like that of the Mexican savannah or North America ’s canyons.

After Katutau we drive to see untouched, completely uninhabited Ak-tau (White Mountains) with ancient marine deposits from the former Tethys Ocean which are like a museum of the earth's distant past. Fantastically-shaped natural sculptures rise from the bottom of an ancient sea in all the colors of the rainbow, from the pale blue "Lunar landscape" to the "red mountains". These chalky mountains are 30 km long, 1.5-2 km deep - and 400 million years old. 56 species of the early Miocene flora were found here: pine tree, fir, birch, alder, oak, nut, chestnut, linden, hackberry, pistachio, ailanto and many others. The remains of the ancient animals are preserved perfectly in the lake deposits of the Paleogene-Neogene (crocodile, tortoise, the giant rhinoceros and some primitive predators) aged 25-30 million years as estimated.There is a rich variety of wildlife here, with large numbers of jeirans, steppe antelope, mountain goats and sheep, wolves and foxes. 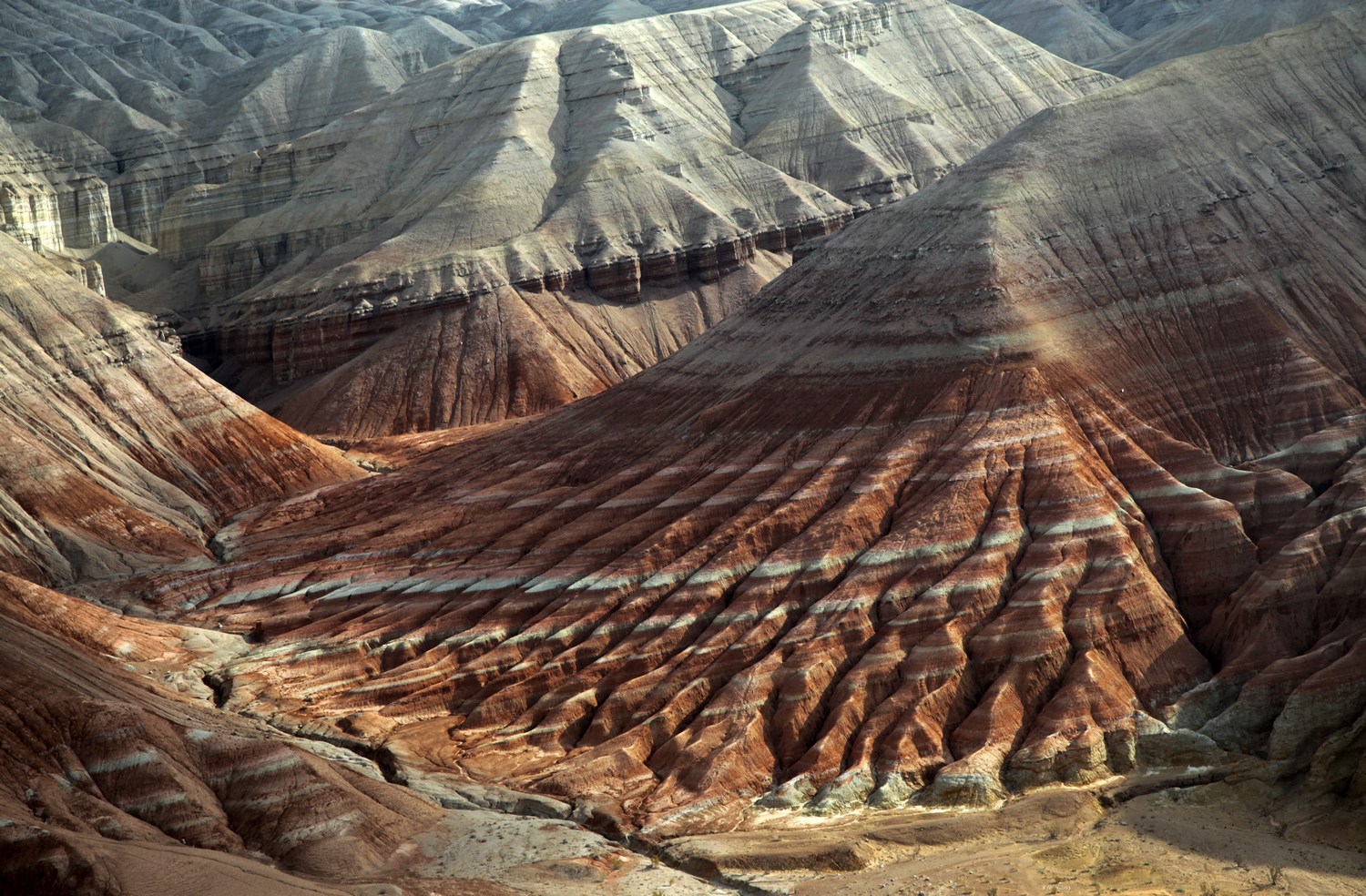 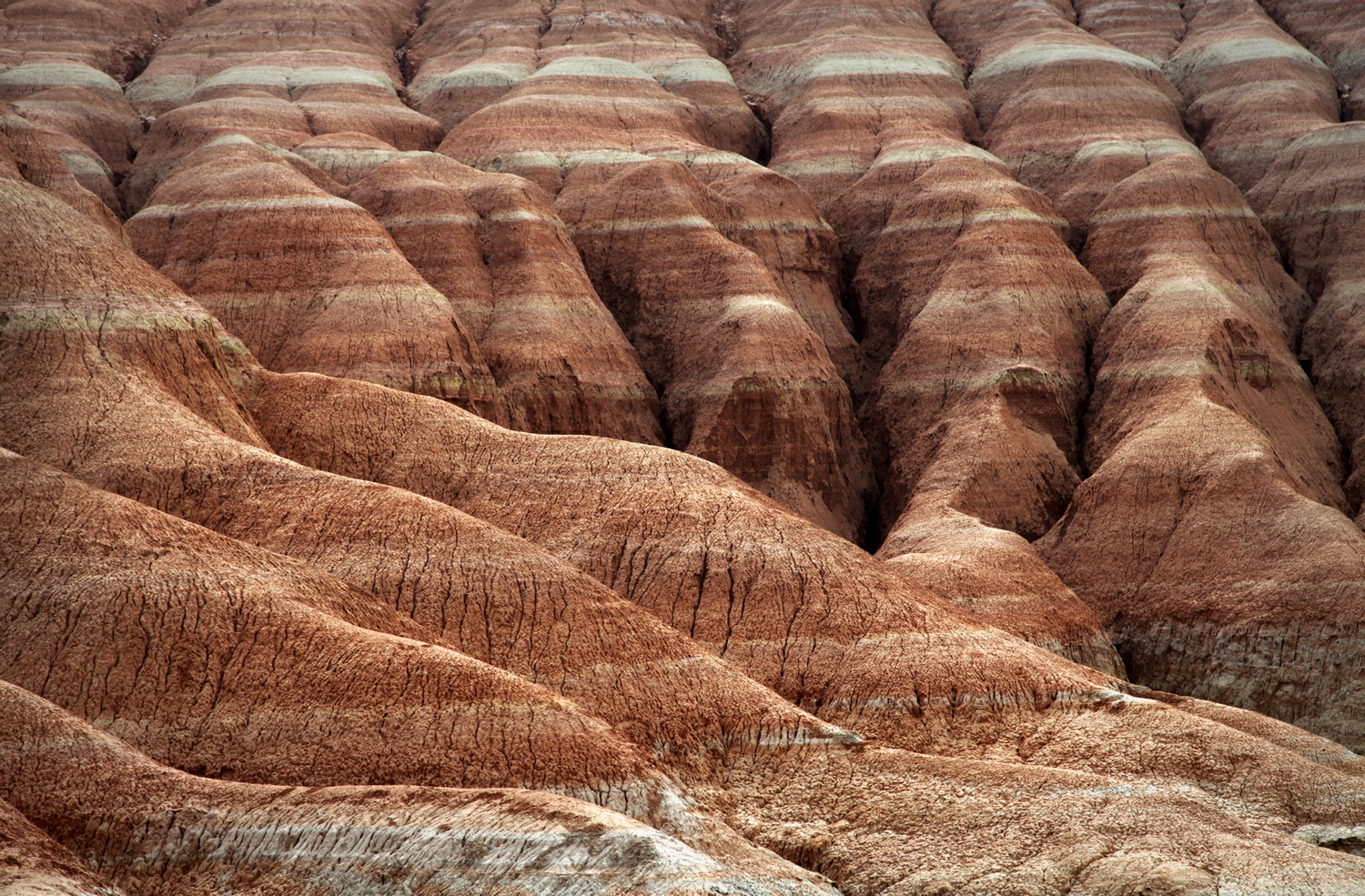 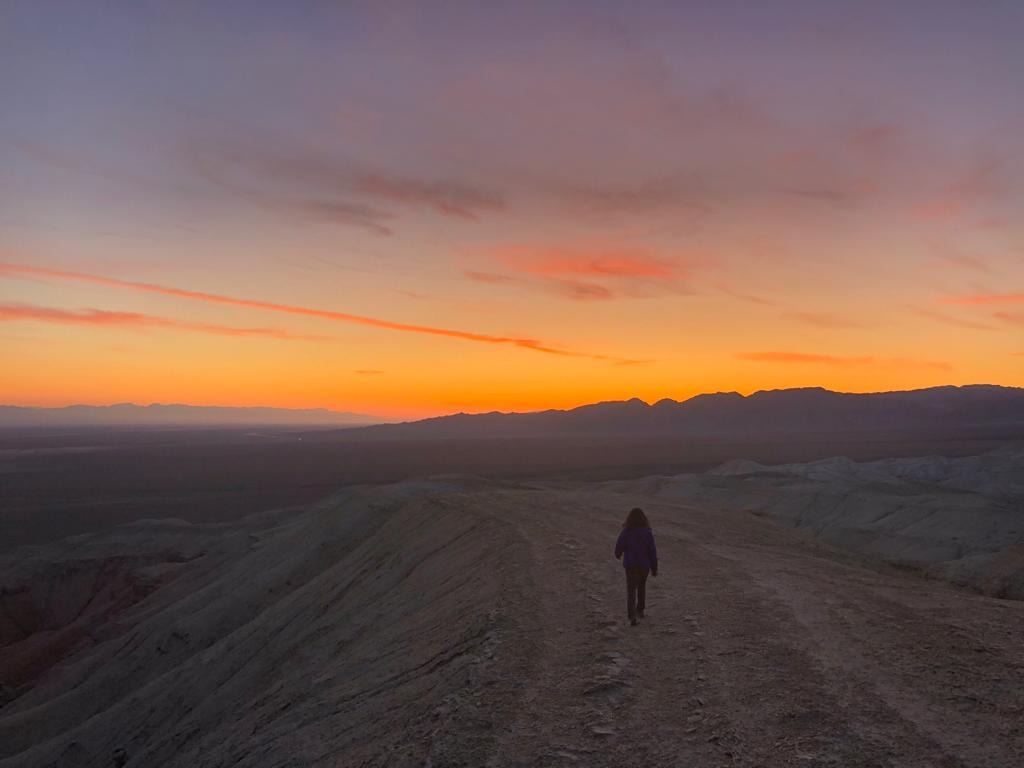 After such an active two days you deserved the right to get good rest in the city or may be continue trip on our 4 or 5 day tours?